Nazigods had claimed to bring down Amazon.com by using a botnet

Yesterday an alert popped up on my radar. A tweet from the NaziGods. They claimed that they were responsible for bringing down the landing page of Amazon.com.

Not a big deal. It's a simple landing page. Such pages do not directly require high end infrastructure.
They even announced that they just waited till there was a high volume of traffic before using their weapons. But indeed some parts of the world were down for some minutes. Even the gaming servers hosted on the Amazon.com infrastructure might have seen some payload. 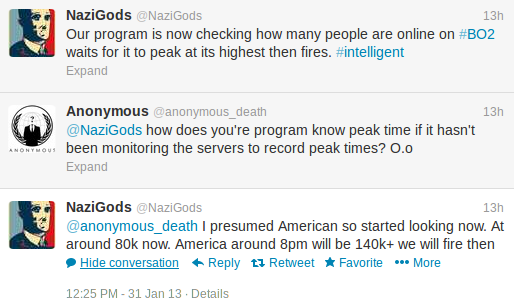 And as NaziGods explained themselves, they did not perform a hack. They simply used the old trick. A DDOS-attack. A tool 16 year old skids use to gain attention. Like a boy putting a stone into the river and shouts that he made an influence. A change in life, but in the meantime the water ignores the stone and keep moving.


Gizmodo sources close to Amazon.com have told them that the outage was not related to any outside group. It will be hard for Amazon.com to prove that they were DDOSed as attacks might have come from legitimate sources all around the US/world. And it would be bad for their image. They will update if there's more to say, but it sounds like old NaziGods was full of it after all.

Seems that shortly after the attack on Amazon.com they tried to attach Nike.com but failed.

But how heavy was the weapon that NaziGods claimed to have used ? 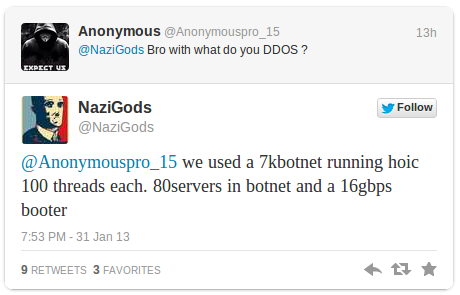 And is installing a high level performance botnet difficult to setup? No. Not at all. If people can deface servers around the world and thus upload their shell, then why not uploading their botnet clients on those servers?

It's all about a skid that makes time to prepare,  to be patient and a bunch of badly secured servers hanging on the net.
Gepost door Admin op 11:09